GoLocalise is the only translation agency offering translations from Minangkabau to any language in the world. 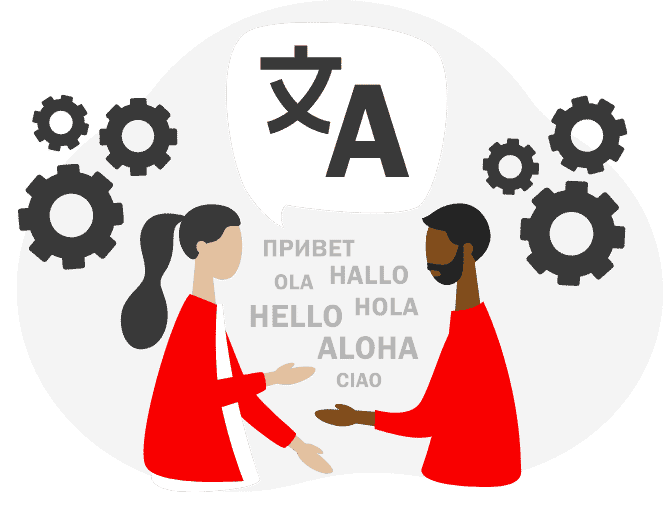 GoLocalise is proud to provide a comprehensive Minangkabau translation service, specialising in audio and video content and tailored to our clients’ needs.

Minangkabau to English Translation Services? Yes, We Offer This Too!

We also offer high-quality translation from Minangkabau to English with a quick turnaround. We make sure that all information and nuances are properly communicated.  Thanks to our native English translators who are not only linguists and language enthusiasts, but also carry expertise in specialist subjects such as law, marketing, business, economics, physics, medicine, IT and more.

With our expertise in re-versioning audio and video content, we can help you access new markets and promote your content. You will receive a comprehensive, cost-effective, and trouble-free video translation service.  We can do everything from transcribing, translating, and voicing a video, to creating Minangkabau subtitles and artistically modifying captions or on-screen text for a foreign language version of your film.

Check out our Translation pages for more info

Send Your Project Viral with the Help of the UK’s Leading Minangkabau Subtitling Company.

Subtitles occur on the screen as text in reaction to the characters’ speech or dialogue. They are typically used to transform media into a language that the audience can comprehend. If subtitles are not accurate to the spoken word on screen, the viewers’ understanding of the content can be negatively impacted. Precisely created subtitles, on the other hand, enhance the value of your video content.

That’s why we have professional linguists in place to create subtitles for your film or other video content. Our team consists of both local and foreign resources to ensure that every uttered word in another language is correctly translated.

Check out our Subtitling pages for more info

Get High-Quality Minangkabau Transcription Services for Your Audio and Video Content!

Check out our Transcription pages for more info

We provide Minangkabau audio recording services for the following projects:

Check out our Voice Over pages for more info

You deserve the best!

Every single detail will be analysed, studied and looked

after so that you do not need to worry. Some would say it’s not too classy to blow our own trumpet… but we just like to point out two very important details. We have achieved ISO 9001 Quality Management certification in recognition of our consistent performance and high standards, and ISO 14001 Environmental Management because we care about our planet! And if you are still curious and want to know more about us, why not have a look at our studio page.

Having a strong audiovisual department on your side makes all the difference!

With GoLocalise you get an experienced and motivated team of professionals that work regularly alongside translation and production companies. We understand the technical requirements necessary to produce perfect foreign language and English voice overs. Our project managers will assist you along the way and we’ll break down the process and present it to you without the big words or technical industry jargon, so you don’t need to worry about the technical aspects and can simply concentrate on growing your business. By working with GoLocalise you’ll be able to offer additional services, i.e., voice over, subtitling and translation to your clients, with a partner who will deliver and on whom you can truly rely.

When working with translation companies we provide easy-to-follow guidelines so that you can provide your own translations for us to “convert” into subtitles, or voice over your translated scripts. Or if you prefer, we can take the entire project off your hands and keep things simple for you – it’ your call! We’re equally used to working with production companies, so we can deliver your translations or subtitles in any language and format of your choice – either burning-in the subtitles onto the video for you, or supplying you with XML or PNG files for you to do yourself – Adobe After Effects and Final Cut Pro ready files.

Don’t leave your important communication to chance. Make sure your message is clearly understood by your audience and choose GoLocalise for your next voice over project.

We have thousands of passionate and professional voice over artists ready to work with you. No matter the type of voice you are looking for, we’ll either have it in our books or find it and source it for you. We’ll organise a casting and ensure you get the perfect voice to suit your needs.

You will also benefit from having your own dedicated project manager – a single point of contact – to guide you through your project, answer any questions you may have and make things a whole lot easier.

Your project will be in the safe hands of one of our multilingual project managers.

They will guide you through every step and ensure you understand the process. Our industry has a tendency to use lots of technical jargon but your dedicated project manager will be on-hand to untangle the mess and explain all you need to know to ensure you only pay for what you need.

If you need help in choosing the right voice over talent to deliver your message then just ask your project manager. From booking our voice over recording studios to ensuring you project is delivered on time in your chosen media, relax and let your experienced project manager take care of everything. You will receive unparalleled attention to detail and customer focus at competitive prices. You’ll wish everything was as easy as a GoLocalise voice over!

Your most discerning customers will thank you for choosing our modern state-of-the-art recording studios. Every detail has been carefully thought through for your comfort, leaving you to simply focus on what matters most - the voice over session.

Your recordings will sound beautiful and crystal clear thanks to our high-end studio sound-proofing and audio equipment, i.e. ProTools HD and Neumann microphones.

Maximise your budget by reducing the need for retakes with the help of our experienced in-house sound engineers who will professionally capture and edit your audio. And for those recordings in languages which neither you nor your client speak, we’ll bring a qualified pro to your session to add that essential ingredient. To make you feel right at home, we provide high-speed Wi-Fi Internet and air-con is available. And last but not least, we have the biggest cookie jar you’ve ever seen, that’ll make your custom brew taste even sweeter!

Due to the huge proximity between Minangkabau and Malay, there is some controversy regarding the relationship between the two. Some see Minangkabau as a early variety of Malay, while others think of Minangkabau as a distinct (Malayic) language.

Minangkabau is one of a few languages that generally lacks verb forms and grammatical subject-object distinctions.

Besides Indonesia, Minangkabau is also spoken in Malaysia, by some descendants of migrants from the Minang-speaking region in Sumatra (Ranah Minang, Tanah Minang, or Land of the Minang). Significant numbers of the early migrants settled in what is now the Malaysian state of Negeri Sembilan; this Negeri Sembilan Malay, known as Bahaso Nogori / Baso Nogoghi, is now a distinct language, more closely related to Malay than to Minangkabau. More recent immigrants are known as Minang.

What our happy customers say

We used GoLocalise to voice several of our films in Vietnamese. The service was friendly and professional. Being able to attend the recording sessions gave me confidence; the sound engineer had taken a lot of time to familiarise himself with our films and scripts, and the voice talents were incredibly competent and good at adapting to any changes in the scripts as we recorded. The whole process was incredibly smooth and I felt in safe hands.

We have used GoLocalise on a regular basis for projects in a number of languages. The service we receive is great. The team is always friendly and professional. The voiceovers we receive are of a very high quality and the turnaround is extremely quick. We are very happy to recommend GoLocalise to other businesses.

They’re reliable, adaptive and obsessed with quality. And while you can never be 100% guaranteed of perfection, you can be sure GoLocalise will go the extra mile to get it right every time. Whether that’s hiring extra resources, hopping on multiple calls or even changing their internal processes, they’ll do what it takes. We’ve worked with them now for over to 5 years and we are truly thankful to have such a strong localisation partner for our business.

Sales and Marketing Director at Epipheo

GoLocalise has been Atlas’s sole provider of translation and foreign voiceover services since 2011. Their friendly and efficient team have localised a range of technical and behavioural projects and in a variety of multimedia formats. Atlas considers GoLocalise to be our localisation partner; trusted to consistently deliver on time and to a high standard.

GoLocalise are a joy to work with. Nothing is too much trouble for them and we always appreciate their good advice, flexibility, fairness and professionalism. I would highly recommend them for any project.

I really enjoy working with GoLocalise. The team is very nice and flexible, and they deliver subtitles of high quality, both from a technical and linguistic point of view. Subtitling is a stress-free matter when it is in their hands, I would definitely recommend their services.

Golocalise are our supplier of choice for all our subtitling and transcription needs. After years of hassle trying to do it all in-house we have found their service to be a revelation in terms of speed, flexibility and costs. Their team is extremely responsive and can always turnaround requests, in any language, within our short deadlines. We can confidently rely on them to provide any deliverables without ever worrying about the accuracy of the subtitling.

Head of Production at Casual Films

It was a pleasure to work with David and the team at GoLocalise. David gave me lots of help and advice, guiding me through my first subtitling project. He really knows his stuff! The experience was completely pain-free. I would not hesitate to recommend GoLocalise – outstanding work at a good price.

I really love working with GoLocalise. Their subtitling department takes care of everything and they always deliver the best quality files. I’m also very happy that they’re willing, and capable, to work with all kinds of requests, and are always happy to help me and make the process better. The team is also so very helpful, and very nice to work with. I always recommend their services to everybody.

We’ve worked with the GoLocalise team on countless video projects and have always had the same consistent, great experience. Not only are they responsive and quick on turnaround, I can always trust the VO will be done right – they are always 100% clear with communication and ensure their talent is prepared to record by asking necessary questions upfront before recording. Highly recommended and will definitely work with them on future projects.

Trust to deliver by the World Top Brands.

Learn more
Get a quote

Register to our blog today to get notified when we upload a new post!