Apparently “The Happy Dumpling-to-be Who Talks And Solves Agricultural Problems” is the translation in China for the famous film for children “Babe“. Yes, that one about a talking pig who actually solves an ‘agricultural problem”.

I am sure you are thinking, “Ok, this is a really bad translation.” And here goes another example: How do you go from “Leaving Las Vegas” to its Japanese translation “I Am Drunk and You Are a Prostitute”?

The truth is that when it comes to translating titles for films what matters is adapting the title to the target market, making it more appealing, rather than translating word by word.

For some Asian cultures, Hollywood blockbuster titles are plain and simple, and don’t say much about the film itself. For this reason, they prefer to be more literal and explain a little bit about the film in the title.  In Hong Kong, people might not be interested in going to the cinema to watch “Field of Dreams.” I mean, what is it about? Definitely “Imaginary Dead Baseball Players Live in My Cornfield” sounds like a film worth watching.

It is also true that some other times film titles are adapted for cultural or political reasons. However, in some other cases the reason for the new title remains a mystery, and it makes us think that the translator must indeed have got “lost in translation” at some point.

It’s certainly a mystery what was going through the minds of everyone involved with movie title translation over the years. Here’s a look at our top 15 movie titles lost in translation.

2.  “Eternal Sunshine of the Spotless Mind”
Italy: “If You Leave Me, I’ll Erase You”

3. “Airplane!”
Germany: “The Unbelievable Trip in a Wacky Aeroplane”

Malaysia: “The Spy Who Behaved Very Nicely Around Me”

9. “Cloudy with a Chance of Meatballs”
Israel: “It’s Raining Falafel”

14. “Charlie and the Chocolate Factory”
Holland: “The Boy Who Drowned in Chocolate”

… And finally, the one that inspired it all:

15. “Lost in Translation”
Spain: “Lost in Tokyo”
Portugal: “Meetings and Failures in Meetings”

As you can tell, these titles fall into three broad categories:

A title is a film’s most recognisable marketing asset. When you want to launch any media project successfully in an international market, be sure you’ve got the expert help you need.

That means choosing a team that not only understands the desired language but can offer you feedback on what’s most likely to work with the target audience. GoLocalise works with a pool of over 5,000 experienced linguists ready to help when the need arises. 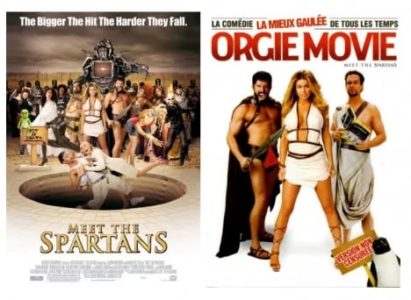 The importance of localisation in business

The Perks and Challenges of Being a Freelancer